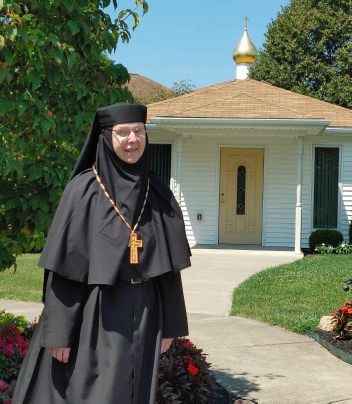 October 31st With our gratitude for spectacular autumnal foliage October slips away, but the joy of  Saint Therese’s friendship remains:  “I will spend my heaven doing good upon earth - until time is no more.” We can be sure that Saint Therese   continues to pray for your novena intentions.    November 1st - Feast of the Martyr  Blessed Bishop Theodore Romzha, killed  by the Soviets in 1947. Bl. Theodore was a Russicum classmate of Father Walter Ciszek SJ., who in the same 1947 was a Soviet prisoner at hard labor in Dudinka, above the Arctic Circle. Today Ukraine, again under siege, testifies that “history repeats itself”!    November 8th - a day to celebrate St Michael and Archangels Gabriel, Raphael, Uriel, and the Nine Choirs of Heavenly Hosts. And how we need these Heavenly powers, for our war is against the

the spirits of evil in the high places. We hope to say more about St Uriel in a future letter.   November 12th - St Josaphat, the Ukrainian Catholic Bishop who died a martyr for Church unity. The war in Ukraine impels us to beg the holy Bishop’s help.   November 13th is the feast of St. John Chrysostom, one of the four  Eastern Fathers of the Church,  and the Patriarch who gave us the Liturgy that bears his  name, “The Divine Liturgy of St John Chrysostom”,  which has continued unchanged (even to 2022) for more than sixteen hundred years!!! What a testimony to the   truth that in every Divine Liturgy Salvation History, the economy of our salvation, is renewed, re-presented and re-lived!  If we borrow the “eyes” of John Chrysostom, (via his sermons and life story) the gift he gave to his flock, centuries ago in ancient Constantinople, can be ours.

Seemingly inconsequential choices can become blessings. Psalm 70(69) vs.2 was my petition beginning this letter. The history of the Jesus Prayer (to pray always) records Ps. 70(69) vs.2 “O God come to my assistance” as the favorite of Egyptian desert monk St John Cassian. Born in 340 in modern day Romania/Bulgaria (known in antiquity as Scythia Minor), John Cassian was bilingual; proficiency in Greek and Latin would influence his life and monastic history! - first in the Greek East and later in the Latin West.  His monastic life began in Palestine in a Bethlehem monastery. Three years later he went to Egypt. Fifteen years later a controversy split the monks and Archbishop Theophilus of Alexandria.  Cassian, with many monks, departed for Constantinople to St John Chrysostom for help, and was ordained a priest, and attached to the patriarchate. However, John Chrysostom, hated by the Royal Family and Empress Eudoxia, was condemned and sent into exile by the illegal Synod of the Oak, which Synod was the fabricated work of Theophilus of Alexandria!  Then, Latin-fluent Cassian was sent to Rome, to plead Patriarch Chrysostom’s cause before Pope Innocent I.   While In Rome, Cassian accepted an invitation to go to southern France (at that time Gaul) to found an Egyptian-style monastery! Cassian built St Victor’s in Marseille, which became a model for later monastic developments in the West! Most important for us at Sugarloaf: Cassian’s life and writings influenced St Benedict of Nursia, who incorporated many of Cassian’s principles into his own monastic rule, and recommended Cassian to his own monks. Through John Cassian the influence of the desert fathers of Egypt made its way into the West, and far into the later Middle Ages! The Divine   (Latin) Office of the Roman Church (even today when prayed in Latin) begins every Hour with Cassian’s beloved prayer: ”Deus in adjutorium meum intende” O God, come to my assistance!

A sudden summons comes on November 14th - Christmas is near! Philip’s Fast, inaugurating the Christmas Fast, will prepare us for the Nativity our Lord Jesus Christ!  The days move quickly and on November 21st the liturgical preparation begins with the great feast of the Presentation of the Virgin Mary in the Temple. Her exalted honor, the Mother of the Incarnate God, Who remains the Second Person of the Holy Trinity, demands our fullest attention and cooperation! And so the November 21st Eastern Liturgy (drawing on the ancient apocrypha)  instructs our faith: the young Child Mary,  chosen by the Eternal Father to be the ever-virgin Mother of His Son, was being prepared by the hidden action of the Holy Spirit.

The last day of November honors the first-called Apostle St Andrew, who is patron of Ukraine, as he was martyred in the area.

Of course November (in USA) is almost synonymous with Thanksgiving Day - part of our historical tradition that inspires the best sentiments in Americans - a readiness to thank, to appreciate, acknowledge blessings received. At least St Bernard for one, declared gratitude a most essential virtue as an explicit prayer of Faith. To whom are we grateful? Of course to God and those He honors by bearing His gifts to us, and most of all, His gift of our Lord Jesus Christ!

God be with you!

Blessed Thanksgiving! And thank you for being our friend!